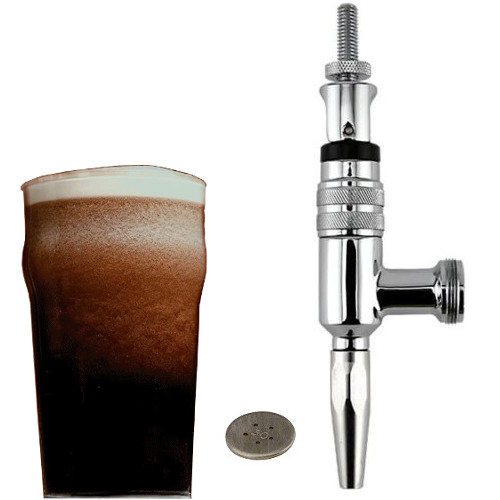 Tips for Dispensing Beer on Nitrogen

]With St. Patrick’s Day around the corner it’s not unusual for our Draft team to get more questions from home brewers and folks with home draft systems about dispensing beer on nitrogen. Without a doubt, certain beers lend themselves well to the nitro method of serving. Guinness on draft, with its iconic head, is but one fine example. More than likely you can create a similar experience at home but there are some caveats we feel obligated to share. 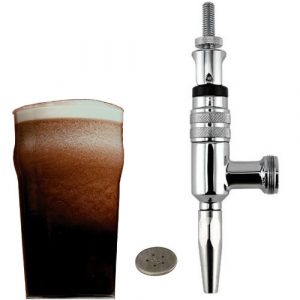 First and foremost there is an added expense to dispensing on nitrogen. At a minimum you will need a bottle of blended gas – a mix of CO2 and nitrogen sometimes referred to as beer gas or Guinness gas. If that mixed gas comes in a CO2 cylinder, you may be able to use your existing CO2 regulator. If, however, the mixed gas is in a nitrogen cylinder, you will need a specific nitrogen regulator, as the fittings are different from CO2.

If your goal is to approximate the cascading bubbles and creamy head of a perfectly built Guinness, you will also require a stout faucet (also sometimes called a nitro faucet). The mechanics of the stout faucet are designed to break up the beer, thus agitating the nitrogen and CO2 in the beer – essential for creating those fine rolling bubbles and that thick frothy head.

Homebrewers wishing to put their own creations on nitro should be aware that it may take some bit of trial and error before you are able to dial in your desired blend of CO2 and nitrogen mix into the initial carbonation of your beer. Yes, even nitrogen beers have CO2 in them. Because nitrogen does not truly dissolve into liquid as CO2 does, beers like Guinness do indeed have some amount of CO2 in them to provide even subtle amounts of carbonation.

Perhaps the greatest downside to serving beer from a blended gas or nitro system is that the beer will likely give the impression of being flat after several weeks from tapping the keg. In a beer carbonated with 100% CO2 and dispensed from a properly balanced system each time a beer is drawn, the right amount of CO2 is put back into the headspace of the keg to keep the remaining beer properly carbonated. In a nitro system, nitrogen and CO2 are both being introduced into the headspace of a keg as each beer is drawn. But since nitrogen does not absorb into liquid there is nothing to completely hold the carbonation in that beer in the keg. In as little as 10 days you will likely notice even a subtle change in the profile of the beer ranging from the appearance of the head to mouthfeel to even flavor. It isn’t that the beer is going bad per se. It’s just losing its carbonation and therefore some of its character.

With the exception of the nitrogen cylinders and the gas itself, the Draft Department at FH Steinbart Co. has the equipment for your nitrogen dispensing needs. Stop by and see us, give us a call or drop us a note.  We’re here to help.[/vc_column_text][/vc_column][/vc_row][vc_row][vc_column]