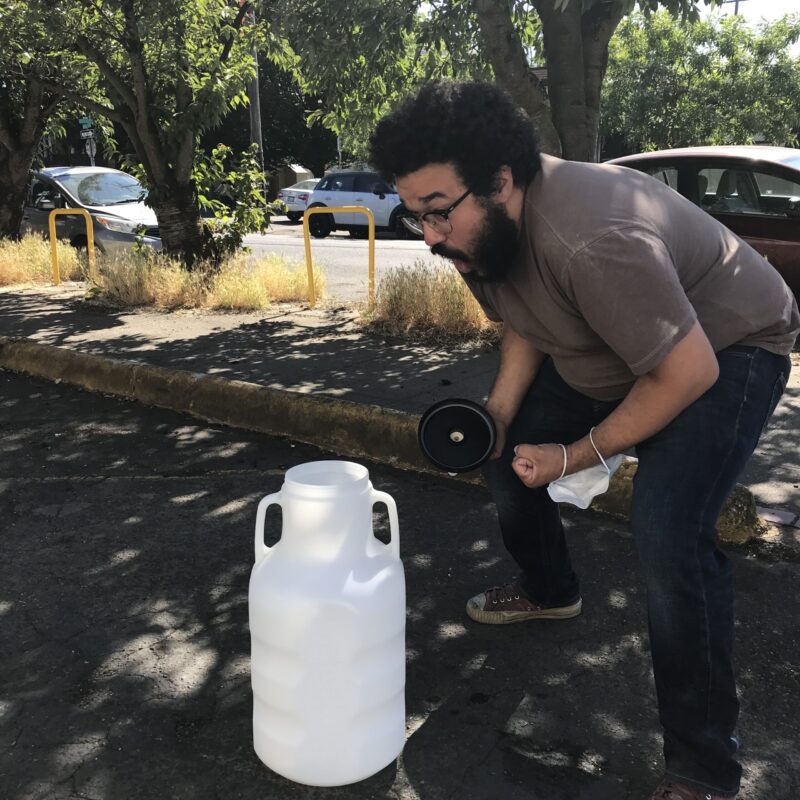 We love all kinds of fermentables here at F.H. Steinbart Co. So we hope it’s no surprise that we have some fun when beverages collide. In one such “collision,” beer and mead meld to give us braggots. They can be mead-forward or beer-forward or perfectly balanced between the two. Bruce & Natasha came up with this braggot recipe on the fly for last year’s Mead Day. The result was an almost universally-loved beverage. The kviek yeast makes something particularly special. They plan to make it again for this year’s Mead Day. The recipe & its origin story, as written by Bruce, are below.

Last year the Steinbart’s Mead Day Special Planning Team (i.e. Natasha and, to a lesser extent, me) found ourselves staring at a rapidly approaching Mead Day with only a 1 gallon batch of mead to share with customers.  We racked our brains for a mead style that could be ready and drinkable inside of a week until Natasha pointed out that I had just started fermenting a batch of Norwegian farmhouse-inspired Golden Ale using Imperial Loki yeast.

“Why not throw in some honey and turn it into a braggot?” she asked.

“A fine idea!” I concurred.

The golden ale was an experiment to test out Imperial’s high-temperature claims for Loki.  After mashing and boiling in the shop’s Grainfather, I cooled the wort down to 100F, pitched yeast (while being sure to scream into the fermentor to ward off any evil spirits nearby) and put the fermentor into a broiling hot oven of a room with no air conditioning where the temperature stayed in the high 80s to mid 90s.  Loki was visibly fermenting just a couple hours after pitching and was bubbling like hot lava the next day.

Fermentation had started to subside after about two days.  At that point, I stirred three pounds of warmed-up honey into the gently foaming wort, which I calculated would bump the gravity from about 1.058 to a chest-thumping 1.083.  The yeast soared back into full froth almost immediately and fermented to a final gravity of about 1.006 within a couple more days.  I racked into a Corney keg with a load of Czech Saaz in a stainless hop canister and left it to force carbonate and soak up the noble hop oils for two days.

Sharing the braggot recipe on Mead Day was easy. The braggot itself? Actually, it was so delicious that sharing it was just as easy.

Braggot Gold is a dangerous concoction that and has laid many low with its pleasantly fragrant orange-rind fruitiness, dry finish, and easy drinkability (aka it hides its ABV well).

Mash at 150F for an hour at your preferred grain-to-water ratio, sparge to collect enough wort for your system.  Boil and add hops at the above times, then cool to 100 degrees Fahrenheit.  Pitch Loki (don’t forget the yeast scream!) and put the fermentor in the hottest room available to you.  Add warmed-up honey after about two days when you start to see the fermentation settling down.  If bottling be sure to dry hop for two or three days first and carb to 2.5 volumes of CO2.  If kegging you can dry hop in either the fermentor or keg, depending on your preference.