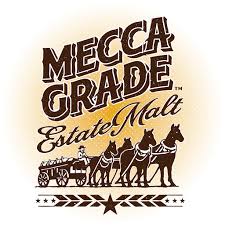 In today’s world of global industry, malt production for beer brewing is a pursuit of massive scale, impeccable consistency, and relentless efficiency. In contrast, Seth Klann and his family are producing malt with a focus ALWAYS on flavor. Every step of the process, from breed selection to kilning has been diligently curated to yield products that stand alone in quality and individuality. We recently had the opportunity to tour the Mecca Grade malthouse and farm in Madras, OR and participate in an innovative sensory analysis exercise at his laboratory / taproom onsite.

Madras is high desert country, with average yearly rainfall at about 12 inches (Portland received about that much in February 2017!). I was intrigued to learn that there is a good reason to grow malt in Madras, as the hot, dry climate lends itself well to seed production. If you have ever grown basil, cilantro or fresh greens in the summer, you know why the desert would make for a great place to grow seed.

For anyone who questions the desert-like nature of the Madras region, note the scorpion that I shook out of my boot on the first morning of our trip.

When we arrived at the malthouse, Seth lead us through a blind sensory exercise called the “Hot Steep Method” of various pilsner malts, including his “Pelton” iteration. The method has recently been approved by the American Society of Brewing Chemists for sensory analysis. It is a great method of tasting malt ingredients that uses common equipment and can be done in the home quickly. Read more about the method (here ←–link).

I was enlightened by the exercise, as I have developed an expectation that Mecca Grade malts are “malty-er” than their non-craft counterparts. But I was surprised to find that Pelton was the lightest in color, and full of classic haylike and grassy notes. This was not just a “pilsner-esque” malt, it was exemplary. It was nice to see that Seth’s malts can shine in traditional styles and purposes.

After the sensory we spent some time in Seth’s Lab and Brewery. He has built an impressive electric brewery, with all the bells and whistles. It seems he does a lot of testing in there on his own, although all the analysis of Mecca products that you see posted is from an independent party.

Can you guess what a friabilimeter measures?

After learning a lot in the lab, we moved on to the malthouse where Seth was steeping a batch of Vanora in his One-of-a-kind “mechanical floor-malter”. Seth designed and built this all-in-one machine from the ground up. It slowly turns over a long and shallow bed of malt constantly during steeping and kilning, ensuring unrivaled consistency, kernel by kernel. As I watched the behemoth slowly churn out Oregon’s finest malt, it became apparent to me the innovation at play in Seth’s invention. The “Uni-Malter” steeps and kilns in the same machine, 12 tons at a time. (Due to the proprietary nature of the machine, we won’t be posting any pictures of the Uni-Malter.)

Although this silo holds one million pounds of grain (and they have four of them!), Mecca Grade is still a tiny malthouse in relation to the rest of the industry. It was impressive to see such vast amounts of material completely processed by just two people.

As we proceeded to tour the fields of the Klaan family farm, Seth and Brad showed us the test field, where they are growing experimental breeds of barley in a search for Oregon’s next ground-breaking beer ingredient. In partnership OSU’s barley breeding program, The Mecca Grade farm is doing their part to grow, analyze, and brew with the next generation of malt breeds. The potential is exciting, to say the least. There is talk of a hybrid malt of Maris Otter and Full Pint (potentially called Maris Beaver, in reference to the OSU mascot!) or Golden Promise and Full Pint (Oregon Promise).

In the back of the Farm is a lookout from “The Mecca Grade”, with a spectacular view of the Deschutes River. Wild high desert herbs like yarrow and sage grow here, and Seth sometimes employs them in his brews as a nod to land that produces his malt.

The view from “the Mecca Grade” looking over the Deschutes River.

For brewers like me who are always seeking the highest quality and authenticity in beer ingredients, Mecca Grade malts are in a class of their own. Full Pint is truly a breed of barley that belongs to Oregon, and the malt made from it is distinctively ours as well. To learn more about the line of malts we offer check out Seth’s descriptions here: See Our Mecca Page

We brought a keg of beer to serve in the Mecca Grade taproom, however, we found it necessary to tap it a little early, during our camping trip in Ochoco Forest. Here we used nature’s kegerator to keep it chilled.