One Word: Plastic.
33 Beers: Professional Edition is printed on a unique, American-made “paper” composed of HDPE, the same substance used to make gallon milk jugs. Because of that, it’s easy recycled when you’re through with it. Should you decide to keep your notes for posterity, fear not – the material is archival, too.

Use Your Favorite Pen or Pencil
Despite its water-resistant properties, you can write on the pages of 33 Beers: Pro Edition with just about any normal pen or pencil. Once dry, the ink doesn’t run. Magic!

Beer is My Favorite Color
Try as I might, I’ve never been able to safely carry a hydrometer around, with which to evaluate a beer’s terminal gravity, should the brewer not provide that information. But color? Color can be carried. The inside front cover of 33 Beers: Pro Edition includes a foldout swatch book you can use to evaluate your beer’s color, and put a number to it.

In larger breweries, color is communicated in terms of SRM – Standard Reference Method. A small sample of beer is put into a small container, and light of a particular wavelength is shown through using a fairly expensive machine. The amount of light passing through (Called “Transmissive Color”) is detected, and the machine spits out a number somewhere between 1 and 40-ish.

Your eyes see color a bit differently (called, “Reflective Color,” because our eyes register the light which bounces off a beer glass), and since that’s what you’ll be using, I recommend a different methodology.

For lighter-colored beers (Pilsners, American Lagers, etc.), pour a sample about 2.5 inches deep, and compare it to the swatches inside the front cover of 33 Beers: Pro Edition. For darker beers (think Porters, Stouts, Barleywines), pour a shallow sample. This allows more light to penetrate darker, thicker beers, making comparison easier. By contrast, a “thicker” pour of lighter beers exaggerates color differences — at a half-inch depth, 2 and 4 SRM are pretty much identical. To aid in pouring accuracy, I’ve included a fill meter on the foldout front cover. In the image below, you can see a 17 SRM Vienna Lager on the left, and a 4 SRM American Lager on the right.

Designed for Speed
As with the standard 33 Beers, taking is as simple as checking a few boxes and entering a few basic facts. In addition to space for noting SRM, this edition adds a “bubble meter” which allows you to evaluate a beer’s carbonation level.

The flavor wheel in 33 Beers can be used to quickly recall a beer’s unique flavor long after consumption. For low values of the flavor, fill in dots near the wheel’s center. A Belgian dubbel is used in the example shown.

Secret Ingredient
A teeny, tiny amount of real beer is added to the ink in each new edition, which is cryptically noted on the back.

Eco-Friendly
The booklets are 100% recyclable (HDPE 2), printed using inks made with 20% soy and 30% vegetable oil in sunny Portland, Oregon. 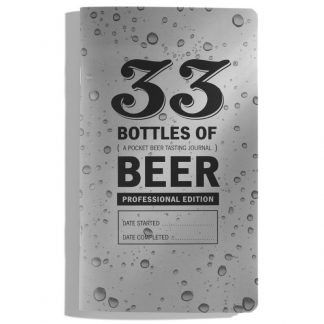