This gas ball lock to hex thread adapter gives you the flexibility to dispense either commercial beer or soda kegged home brew without having to cut lines or change fittings. If you have ball lock connections on your gas and product lines, you can use this adapter to quickly hook up a sankey coupler in order to tap a commercial keg without dealing with undoing clamps or cutting lines and putting new barb connections in each time you want to switch.

The female end of the adapter has hex thread (also sometimes called beer nut thread), which is the threading that is standard on sankey couplers. Simply remove the hex nut and tail piece (the barbed part) from the side of the sankey coupler, and screw this adapter on instead. Then simply attach your grey gas side ball lock coupler to the stud the same way you would on a soda (“corny”) keg.

Pair with the Sankey to Ball Lock Product Adapter, sold separately, to complete the system. 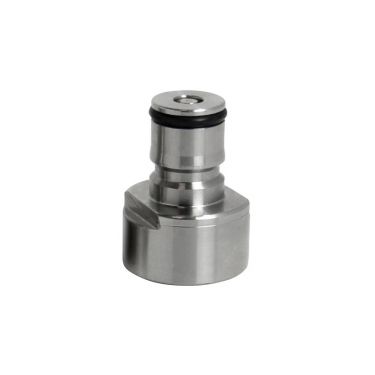