Breeding/Development: Germany. An offspring of Brewer’s Gold with some ancestry from an American wild hop, this English-bred high alpha variety later found favor and acreage all over the world. In Germany it’s known primarily as a bittering hop.

Brewing Application: Dual purpose. German-grown Northern Brewer has a more “noble” and less pungent profile than when grown elsewhere, which makes it suited to a variety of traditional European styles where a strong or “American” hop signature may not be appropriate – German lagers, Belgian and Trappist ales, farmhouse-style beers.

Sensory: Predominantly spicy with an undercurrent of woods and wild fruit, suggestive of its Brewer’s Gold parentage. Overall balanced with lasting flavor that reads as simply “hoppy” – not as outright woodsy and bright as US-grown Northern Brewer. 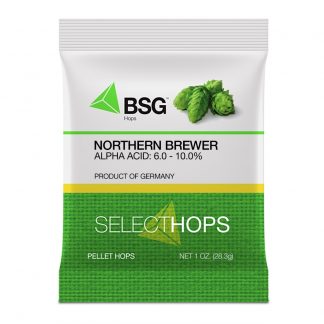