Coriander has a subtle flavor & aroma that is warm, spicy, nutty, slightly fruity, and complex. It is used in brewing some wheat beers along with other spices to give these beers a light and refreshing flavor with a hint of spice. Coriander adds spicy and lemony flavors and aroma to spiced beers and Belgium ales such as the white beers called Witbier. Coriander is also added to seasonal spiced beers mostly brewed for drinking during the fall and winter months. Coriander is used to flavor some liqueurs such as Chartreuse and Izarra. It is also used a cheap ingredient to flavor some low end colas. Coriander is often used in combination with orange peel, in Belgium beers and sometimes with cardamom seed as well. Coriander adds floral, citrus, and spicy notes to beers. Coriander should be ground freshly in a clean electric coffee mill or a mortar and pestle. Toasting the coriander seed just prior to grinding will bring out the spice’s volatile oils and give the beer it is brewed with a nuttier flavor. If you toast the coriander, take care not to burn it because doing so will defiantly give the brew an off flavor. The amount of coriander added to the wort will depend on the desired effect in different types of beers. In white beers where the brewer wants to produce a substantial coriander flavor and aroma about one ounce of coriander (or a little less than 1/3 cup) should be used for every five gallons of wort. The coarsely ground or smashed smashed coriander should be added for about the last 5-10 minutes of the wort boil. In stronger ales, the brewer may want the coriander to have a more nuanced effect on the finished beer instead of the more predominate coriander flavor a brewer may be looking for in white ales. For this subtler coriander flavor try adding a half ounce of course coriander seed to the wort for about the last 5-10 minutes of boiling. Boiling coriander too long will cause some of its volatile oils to be boiled off and reduce its flavor. After 10-15 minutes boiling in wort coriander’s flavor begins to fade, so if you find your wort’s flavor is overwhelmed by coriander let it simmer a little longer. Some brewers add coriander to the wort after it has been taken off the heat to steep for a few minutes before the strained wort is put in the primary fermentation vessels. Possible Uses: Belgian Witbier, German Hefeweizen, Liqueurs such as Chartreuse and Izarra

Be the first to review “Coriander Seed 1 oz.” Cancel reply 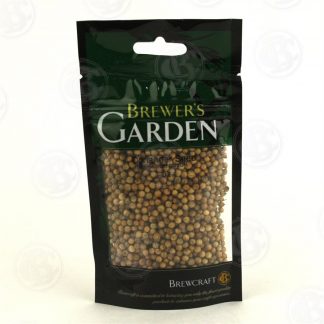