LalBrew® Wit (formerly Munich Wheat) yeast is a relatively neutral strain which can be used to produce a wide variety of wheat beer styles. Ester and phenol production is lower than for traditional hefeweizen strains such as Munich Classic. LalBrew® Wit provides a baseline profile of banana and spice aromas, but leaves space for the brewer to showcase other spice additions typical of Belgian style beers.

Traditional styles brewed with this yeast include but are not limited to Belgian Witbier, American Wheat, Berliner Weiss, Gose, Hefeweizen, Dunkelweis, and Weizenbock.

Vigorous fermentation that can be completed in 4 days

Aroma and flavor is somewhat estery with banana notes 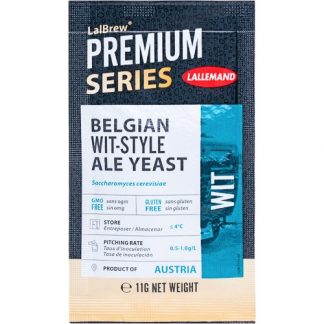