Chrissie Manion Zaerpoor is the owner of Kookoolan World Meadery and Kookoolan Farms.

She’s been a mead enthusiast since about 1980; a home meadmaker since 1997; owner of a licensed commercial meadery since 2009; a founding director of the American Mead Makers’ Association (AMMA), its first Legislative Committee Chair, and Contributing Editor of its quarterly journal; owner / operator of one of the world’s first exclusively-mead bottle shops from 2012–2015; and a multi-time medal winner at Mazer Cup International Mead Competition, the world’s largest mead-only competition. She has written a regular mead and food pairing feature for the AMMA’s Journal since 2013.

​Previously she was an engineer and engineering manager at Intel Corporation, 1994-2006.

“My husband and I have a little farm in Yamhill, Oregon. We raise organic pastured meat chickens, grassfed beef, and grassfed lamb. Plus we have a vegetable garden for ourselves and my little pinot noir vineyard. We’ve been working on renovating our 1905 craftsman farmhouse for years. I’m just a homebody who likes making good things to eat and drink, and having good friends to share them with.” 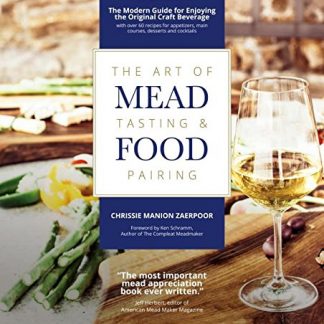 You're viewing: The Art of Mead Tasting and Food Pairing by Chrissie Manion Zaerpoor $55.96
Add to cart