Urban Farmhouse with The Commons Brewery

Traditionally, farmhouse ales were brewed on farms in rural areas. These beers were born of necessity as most farmers needed a refreshing beverage to offer the hardworking farmhands. The Commons rendition was developed in the spirit of that tradition. The beer pours golden with a floral nose, soft underlying hop bitterness, and a crisp finish.

Urban Farmhouse Ale was born as a homebrew recipe in 2009 and by late 2010 was the first commercial beer I sold to Bailey’s Taproom while making beer on my 1bbl nano brewery out of my garage in Portland, Oregon. Urban Farmhouse became The Commons Brewery’s flagship beer in 2011 became a local favorite for many years for those seeking a subtle, refreshing beer. The recipe was developed in the spirit of Belgian farmhouse beers with a hint of contemporary Northwest style. In the end, it’s a simple, refreshing beer that works equally well with barbecue on your deck, or a white tablecloth meal. Share with your friends and family for the best experience.

This product makes 5 gallons of beer. 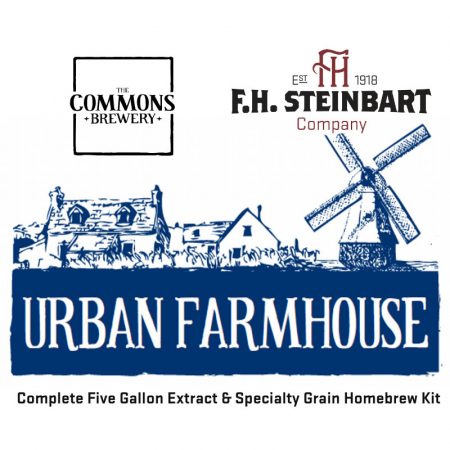 You're viewing: Urban Farmhouse with The Commons Brewery $44.95
Add to cart
Create a new list